Just under 19,000 Jensen cars with the original Jensen badge were built. The stronger markets, in order of total market share, are the USA (half of all Jensens ever made were sent there) and the UK (38%), with Canada and Australia holding on to about 2% each.

Of all Jensen cars, the Jensen-Healey model is the least likely to survive, or – at least – to be recorded as still in existence, possibly because it is one of the models which were most popular in the USA, a country which provides minimum information about their whereabouts.

During the pre-war years, the Jensen brothers were busy designing and producing open and closed sports touring and saloon bodies in aluminium and ash frames.

The first model to be made in any significant numbers was the original Jensen Interceptor (1950-1957). It was made in aluminium with an ash frame, like the pre-war models, and came in both saloon and drop-head coupé. Apart from the rare use of a Chrysler V8 Hemi engine, such as in racer Briggs Cunningham’s own Interceptor, it was usually powered by the popular straight-six Austin 4.0 unit. Chassis and transmission also came from the Austin parts bin. 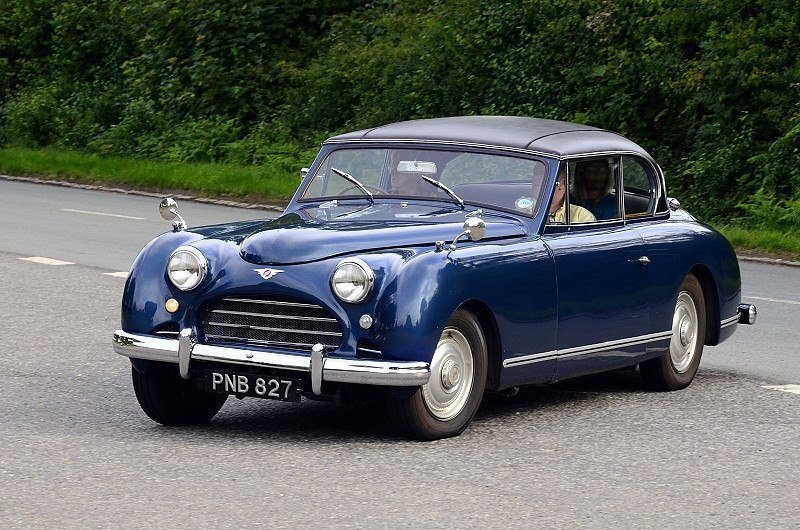 The 541, built between 1955 and 1963, was the first Jensen model to be made of fibreglass on a steel chassis.Again, it was powered by the same three-carburettor Austin 4.0 straight-six engine and had the same four-speed manual transmission as its predecessor, the original Interceptor. The 541 was a little sporty number, with independent front suspension, rigid axle at the rear and a 135bhp top speed; all-round disc brakes soon were featured, a first in a British four-seater saloon

Later versions, the ‘R’ and the ‘S’, had wider bodywork. One 541 was built with the Chrysler V8 Hemi engine (like the original Interceptor belonging to Briggs Cunningham) and was owned by Richard Jensen himself. A four-speed Rolls-Royce transmission system was used in the 541 S. 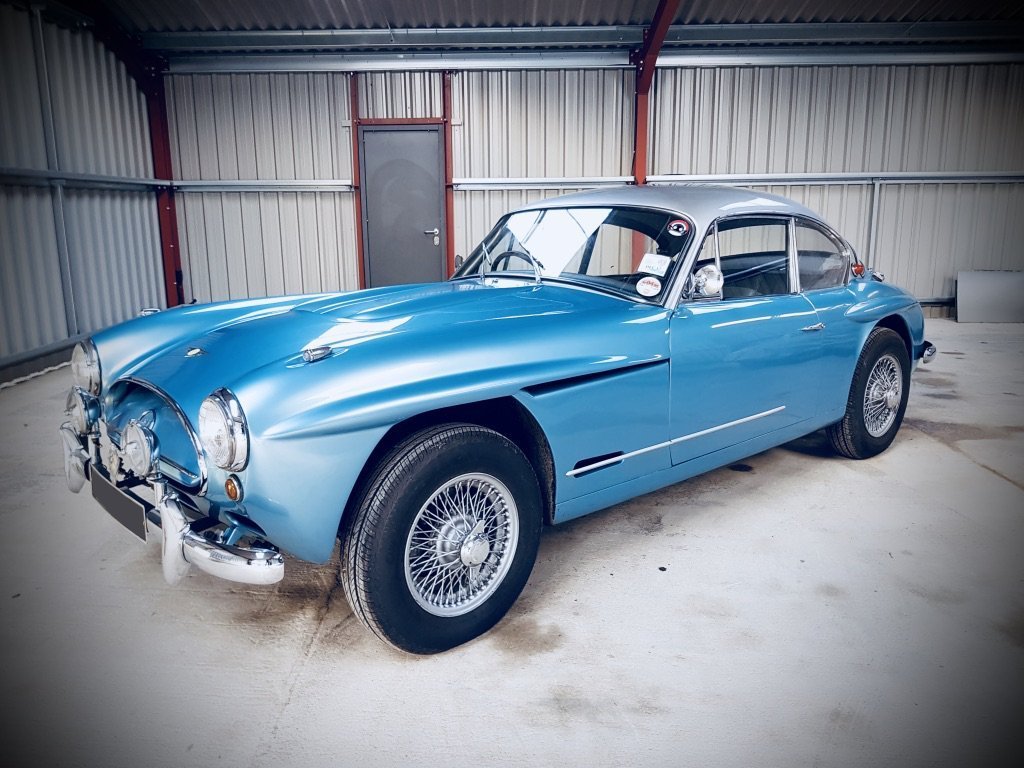 The C-V8, the last of Jensen brothers’ successes before they halted their involvement in 1966, succeeded the 541 in 1962.The C-V8 (Centre-Tube Chassis) was a four-seater coupé in fibreglass produced until 1966, and the first Jensen to sport both the Chrysler V8 ‘big block’ engines (305bhp, then 330bhp) and TorqueFlite automatic transmission as standard. The car was claimed to be the fastest four-seat saloon of its time, with a top speed of 136mph. Given the rarity of the LHD version, the 8 C-V8s ever produced in that guise are keenly sought-after by collectors the other side of the pond. Only two topless versions were built, with the half convertible (just the front seats have a folding roof section) Sedanca rivalling any other of the other Jensen cars for rarity apart from the equally unique FF Convertible. 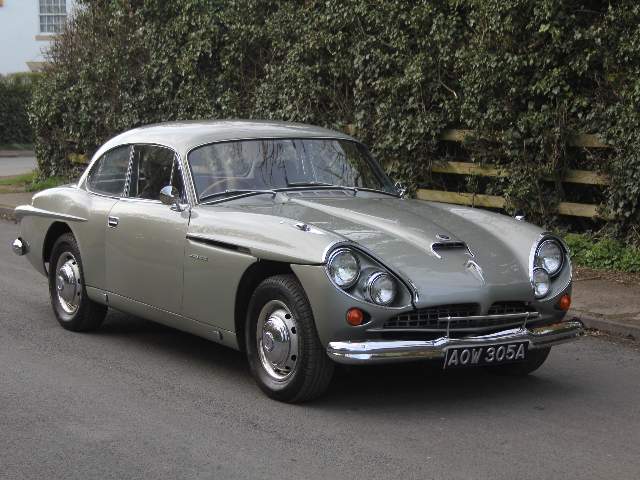 Unlike previous Jensen cars, the 1966-1976 Interceptor was not designed in-house, but by Italian coachbuilder Carrozzeria Touring. The early models were also built in Italy by Vignale. In a further move from tradition, use of fibreglass was dropped: this GT tourer was made in steel.

The Chrysler engine (6.3 and 7.2 V8 versions) was mated to Chrysler’s TorqueFlite auto ‘box, or – rarely, as only 23 were built – by a four-speed manual transmission, also from Chrysler. The new Interceptor was plagued with faults and gremlins, and it took the entire 1967 for the Jensen engineers to try and sort out the many problems of which businessmen and captains of industry, the typical owners, were complaining.

In the history of Jensen Interceptors, the MkIII is particularly significant because it was launched under Kjell Qvale, American importer and dealer who had taken over from Jensen Motors in 1970. Qvale’s influence and focus on the North American market was reflected in the production of Interceptors, the only model available at the time and a cash-cow for the dealer. The model attracted the attention of celebrities such as Led Zeppelin drummer John Bonham; the British Foreign Secretary Lord Carrington (who bought five or six); motorbike champion Phil Read; as well as film companies: it featured in Aloha Bobby & Rose, The Players, Red Tape, Switch, Russian Roulette and Harlequin. 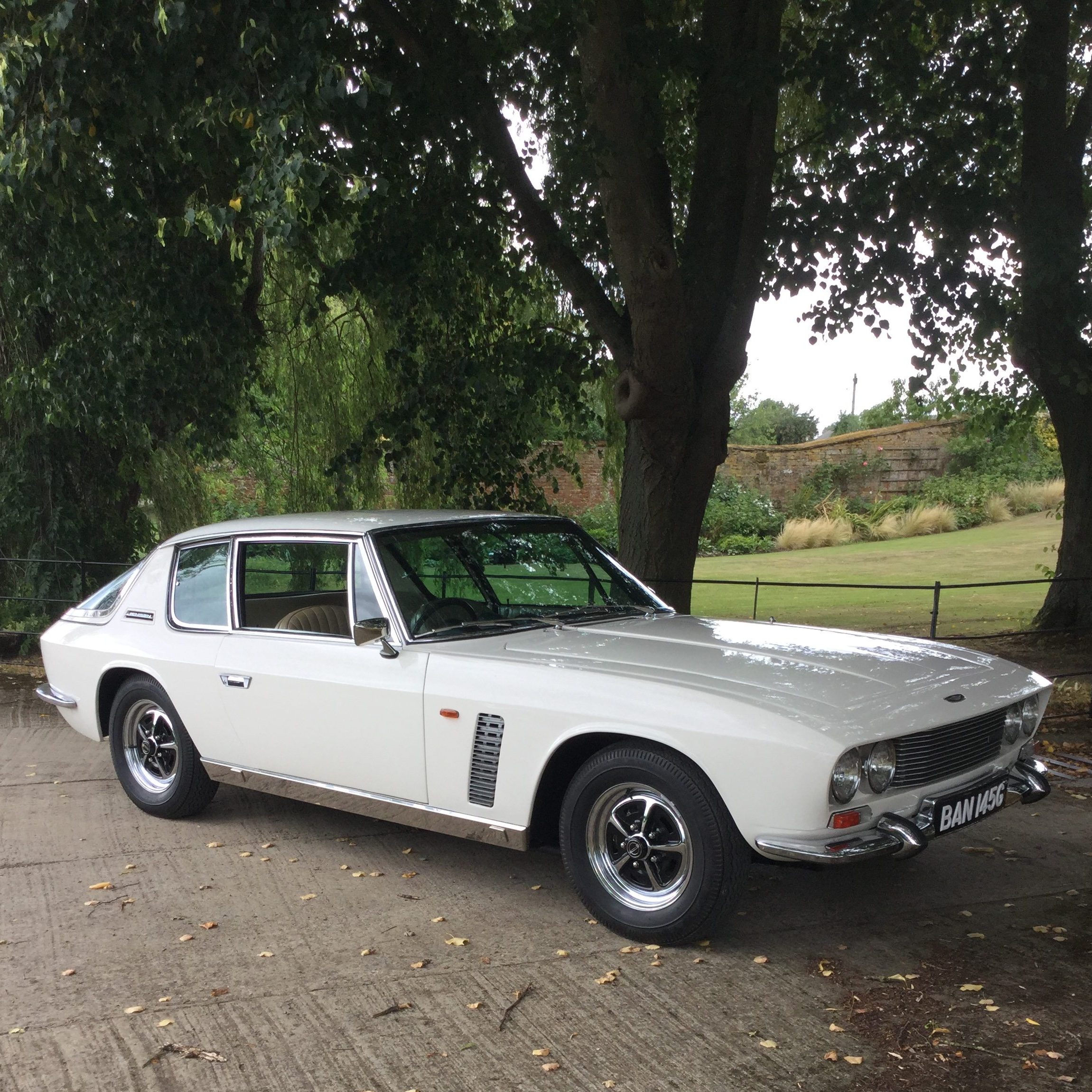 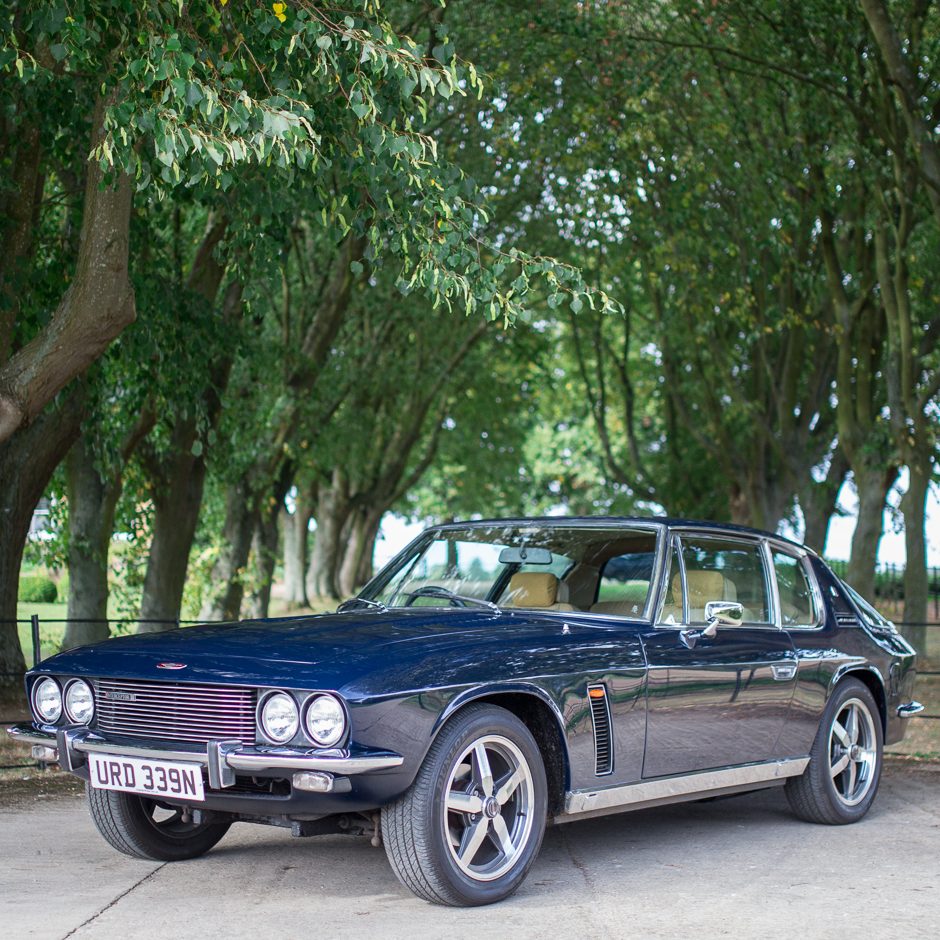 Only made in RHD, the FF moniker was due to the Ferguson Formula four-wheel drive. The ubiquitous Chrysler V8 6.3l engine and TorqueFlite automatic transmission propelled the steel-bodied FF from 1966 to 1971.

Of course, the FF was far from being the only 4-wheel drive machine of its time. All-wheel-drive Bugatti Tipo 53s were already racing. Yet the system did not seem to be very popular, due to the complicated necessity to distribute the power to all wheels reliably and evenly.

Harry Ferguson sponsored British racing driver Freddie Dixon to work on a viable project among others. By the early ‘60s, the Ferguson Formula seemed to have reached a sensible stage in its development, and Richard Jensen’s attention was drawn to it. The trend was for bigger and more powerful engines, and a gearbox to suit would have been the jewel in the crown of a car manufacturer. The C-V8 chassis had to be altered to make room for the FF unit. In 1965 the system was shown in a Jensen at Earls Court.

The Jensen brothers soon left Jensen Motors because of the arguments about the forthcoming C-V8’s replacement and where it would be built. Eventually the Italian-built Interceptors, beleaguered by quality issues, added worries to the engineering conundrums which were the FF versions. FFs’ front axles, in particular, had to be strengthened. In the end, though, the FF was a motoring miracle: it had anti-lock brakes (a world-first) and performed admirably when everything went well. However, as it cost 30% more than a standard Interceptor, Qvale, in an effort to rationalise the range, dropped the FF line.

Nowadays, FFs are very rare and collector’s items, with the Chrysler engine and TorqueFlite transmission. There is only one FF Convertible car. 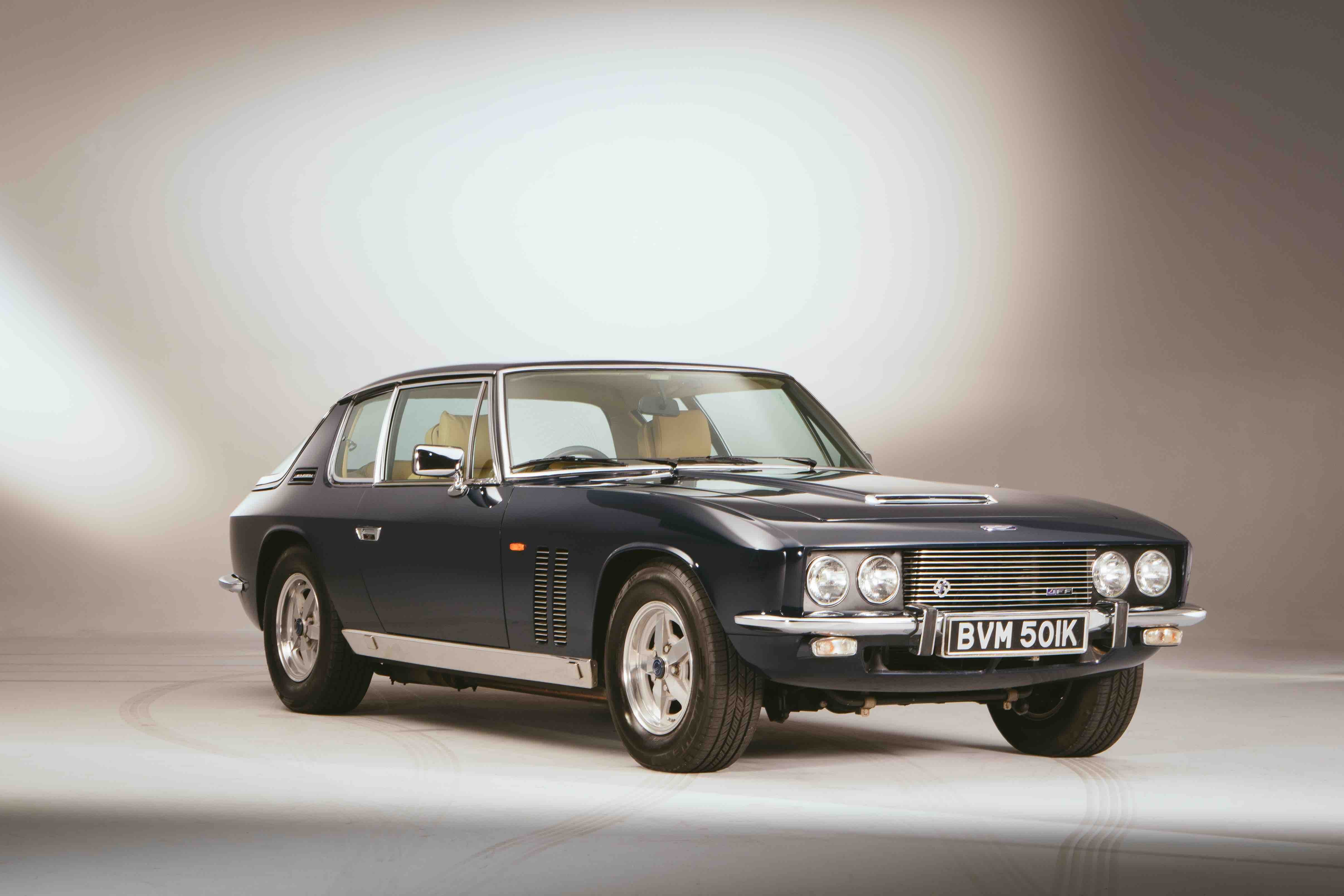 The 1971-73 ‘SP’ version (Six-Pack, i.e. with three two-barrel carburettors) packed 390hp. Only 232 were built, and the SP was the most powerful of all Jensen cars than Jensen ever made, if not the most powerful in the world at the time. It came in saloon, convertible and coupé body styles. The Six Pack engine was part of the Mopar lists briefly, but soon became illegal in the USA. As the flagship of the Jensen range, Kjell Qvale pushed the version whilst pulling the plug on the four-wheel option, which was financially draining. The first production Six-Pack Interceptor underwent more development towards research into the Interceptor replacement: the mule was called ‘Big Bertha’.

Production SPs had vinyl back roofs, though – confusingly – MkIIIs also featured those. The latter would not pump out more than 300bhp, whilst SP engines were good for at least 385bhp. Alas, reliability suffered. The carburettors’ individual functions were different, with the centre unit smaller than the secondaries. Further acceleration could be achieved at an already high speed, as the car continued to increase its speed after the driver had removed his foot from the accelerator (secondary carburettors would come into operation at speed as the primary one drew more air).

Exhilarating as it was, the SP version was also more economical, and 16mpg could be achieved with a little effort once the driver learnt how to tame the animal. 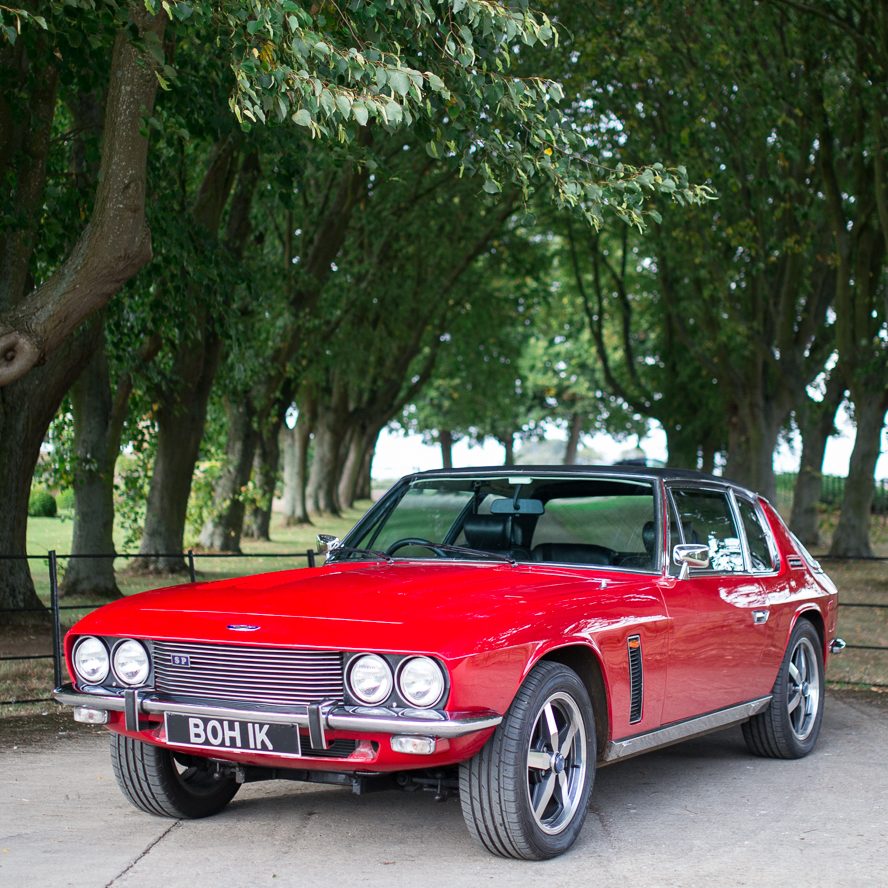 The Seventies saw a sharp change in direction for Jensen: the new little sportscar with a steel body which was to be so popular in the States, was produced between 1972 and 1975. In a departure from Chrysler’s range of engines, the convertible was powered by a Lotus 2.0 S4 dohc (144bhp) unit. It also sported the usual Chrysler four-speed manual gearbox (with a five-speed more advanced Getrag option in later years). Specialist dealer Kjell Qvale, who marketed the Austin-Healey 3000 to the USA until its demise, asked Donald Healey and Jensen Motors (which had built the Austin-Healey bodies) to produce its replacement for that very profitable market. In fact, the Jensen-Healey was the reason why Qvale got involved with Jensen Motors, eventually taking over the company, in the first place.

A fastback/estate version of the Jensen-Healey, the GT was made in steel and powered by the same Lotus engine as the convertible, between 1975 and 1976. Very little, in fact, was different from the Jensen-Healey, apart from the extra seats at the back, which made the shooting-brake a 2+2. The limited run was terminated when Jensen Motors went into receivership in 1976. 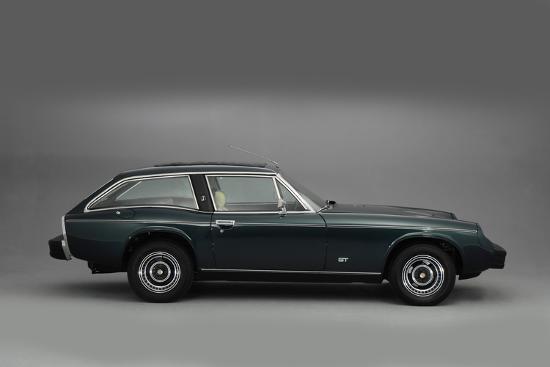 For Jensen cars, the Eighties and early Nineties (1983 to 1992) heralded an S4 version of the Interceptor, still with the same Chrysler engine and TorqueFlite auto transmission. The limited number of S4s did not stop the company from producing saloons, coupés and convertibles with the S4 badge. 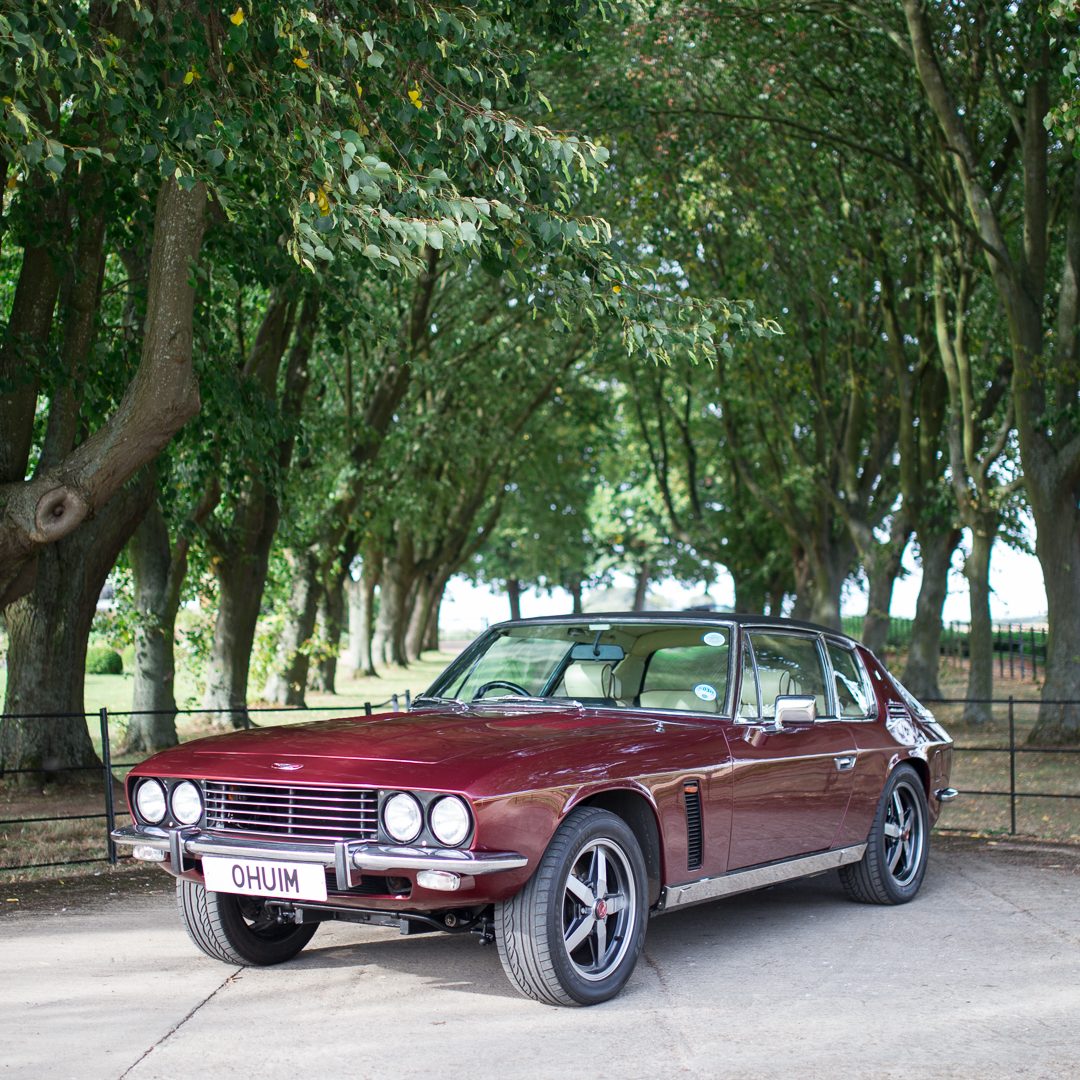